The history of the integration in Waco and La Vega Independent School Districts intersected in a significant way 50 years ago this month.  Or put differently, 17 years after the U.S. Supreme Court decision Brown vs. Board of Education outlawed segregation in public schools, school integration was still an ongoing controversy in those two school districts.

Any attempt to tell this story must begin on August 24, 1970 when a federal court in Austin accepted a La Vega ISD plan to close Carver High School, which had been an African American school since it opened in 1956, and merge it with La Vega High School.  This decision, made only a few days before the school year began, caused a flurry of activity as plans and changes had to be made to integrate both students and faculty.  Within a few weeks after the 1970-71 school year began, a large number of African American students at La Vega High School walked out of class and stayed out of school for a week.  The boycott was in response to several grievances, not the least of which was the closing of Carver and the busing of more black students out of their neighborhood as compared to the busing in of many fewer white students.

As a result, La Vega ISD returned to federal court with a motion on June 4, 1971 asking for a modification of the August 1970 court order.  On July 22, 1971, district officials made the case for their motion.  In response, Judge Jack Roberts decided on Wednesday, July 28, to change the boundaries of both La Vega and Waco school districts by moving part of La Vega into Waco ISD, including both students and property.  An estimated 1,400 or so students, the majority of them African American, and $17 million in property, including General Tire, Texas Concrete Works, Pure Milk Co., and H&B Packing, were transferred to Waco ISD. The change also included the former Carver High School, Dripping Springs School, and J. Newton Jenkins Elementary School.  This change left about 2,100 students in La Vega, 407 of whom were black.  For its part, Waco ISD was ordered to “educate the children involved in schools with a predominance of white students”, among those Richfield High School, Lake Air Junior High School, and Viking Hills and Parkdale elementary schools.  This would require more busing.  While this is only a basic summary of how La Vega and Waco ISDs crossed paths on their long road to school desegregation, more controversy was yet to come.

In a very related development, MALDEF (Mexican-American Legal and Defense Educational Fund), representing Waco resident Pete Arvizu as well as 24 black and Hispanic plaintiffs, filed a lawsuit against Waco ISD on August 10, 1971 arguing that the district had not truly integrated and too many schools were racially identifiable.  In June 1973, Waco ISD released a school integration plan which Judge Jack Roberts approved in July of that year.  Thirteen years later, in December 1986, Waco ISD asked that a federal court dismiss the 1971 lawsuit and declare the district a unitary system.  In December 1989, Judge Walter Smith Jr. approved that request, declared the district unitary, and dismissed the lawsuit. 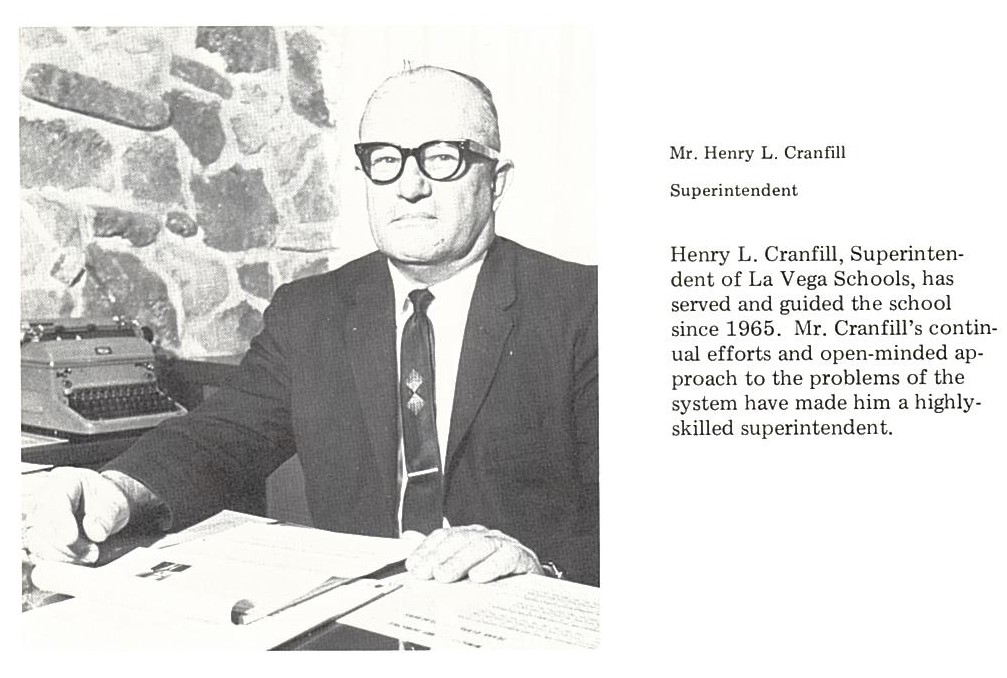 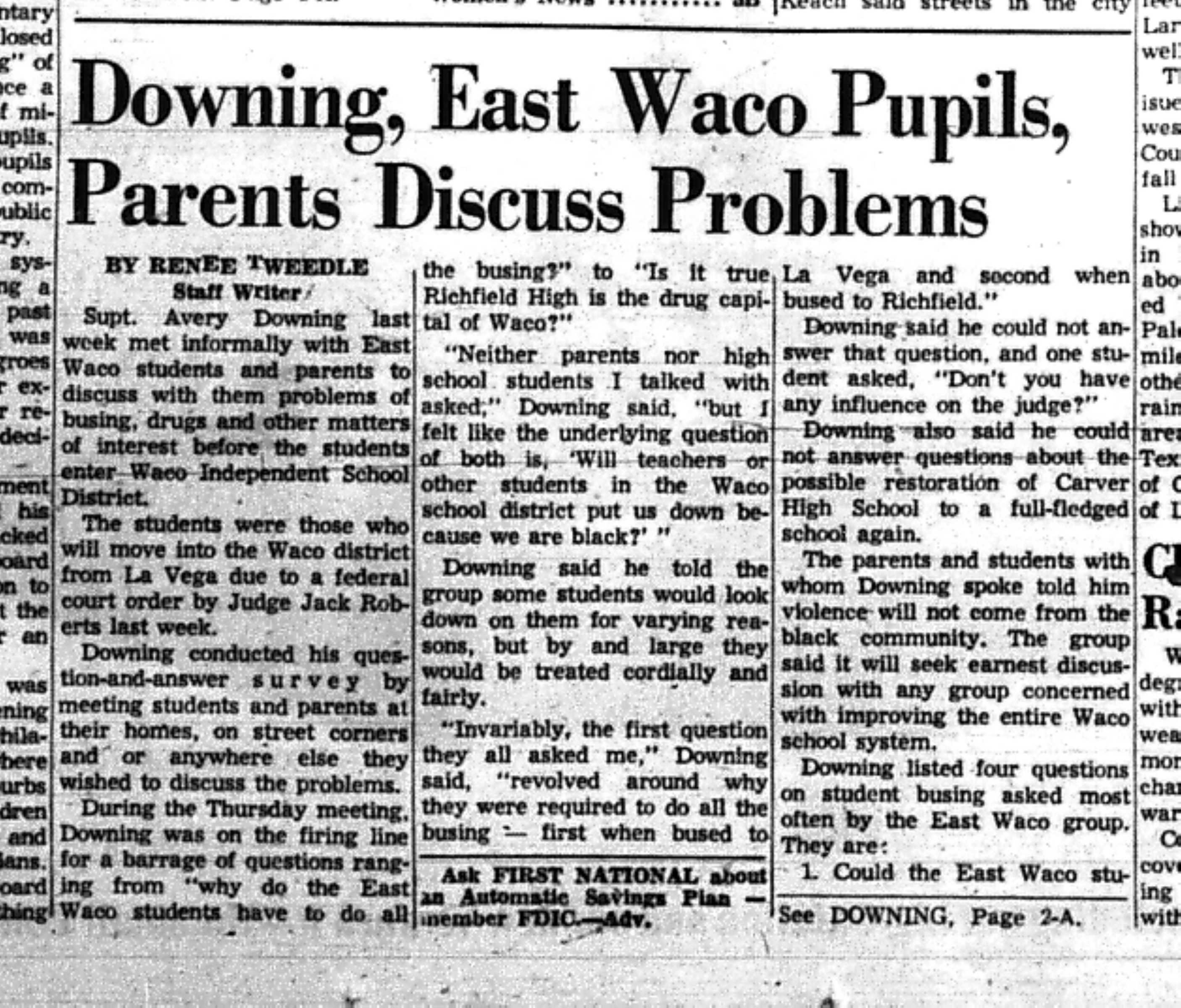 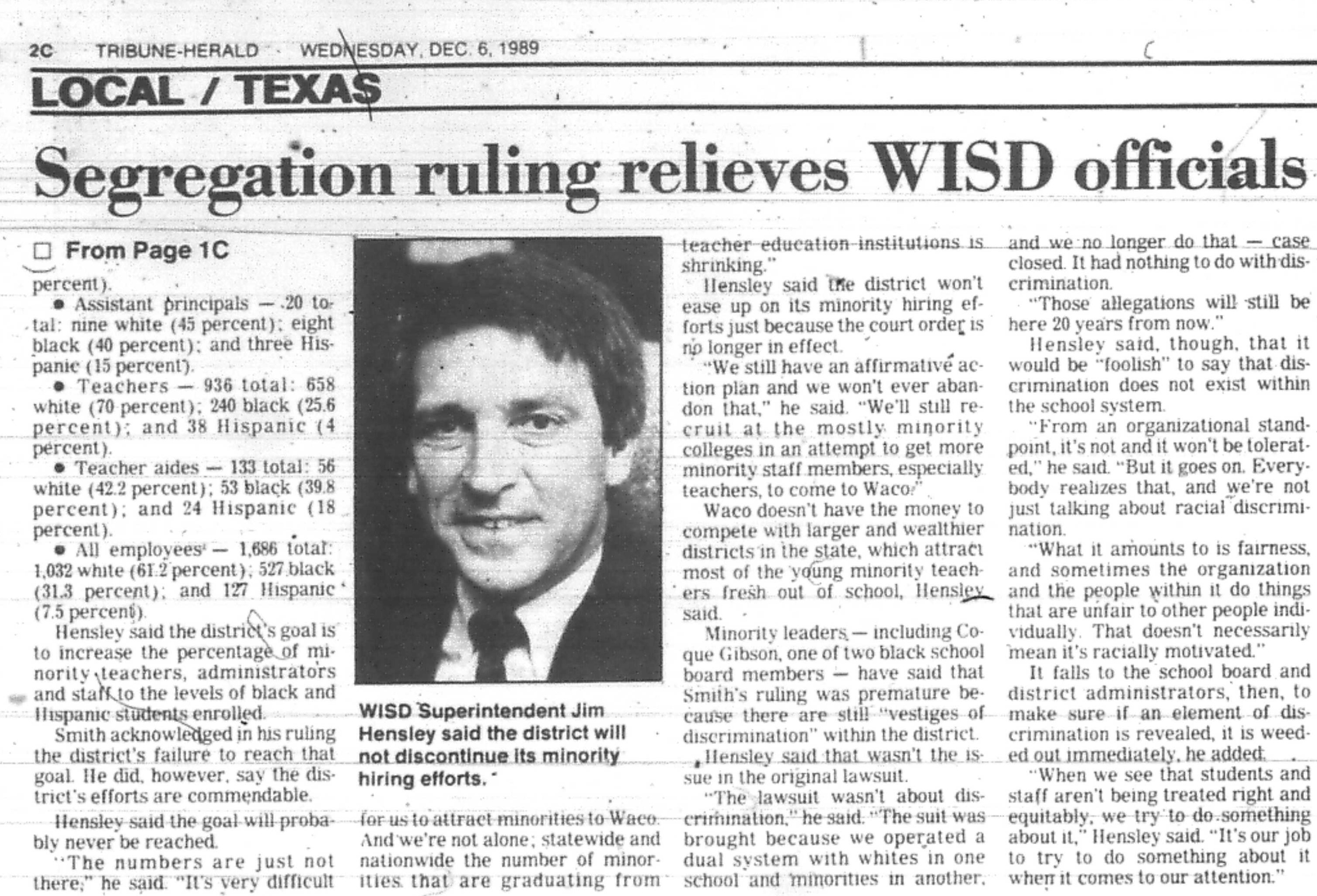